It has been over a year since my last post. I feel terrible about pulling away from my blog to the extent that I did. As most of you probably know, after the Spring Awakening Event last year, I had to take a break from Occupy for a few family events, and then Simran and I moved to Palestine on relatively short notice.

Before going to Palestine, I thought I would have ample time to write posts, and would simply shift the topic to another subject I am passionate about: Palestine. Unfortunately, the workload for my job was drastically different than what I was led to believe. The preparation for teaching classes consumed most of my hours on nights and weekends. The little leisure time I had to spare was dedicated mostly to writing my book, exploring Palestine, and cooking dinner.

Now that I am home in the States, I will be getting back into a regular writing routine. You may also be happy to know that my new book, “Another World IS Possible: Freedom, Economic Truth, and Creating a Society of Humanness” is going to press and will be out in the next couple of weeks.

Like Loading...
I chose the title ‘One Voice’ for this blog because of its dual meaning. On the one hand, this blog is a direct representation of one human voice—mine. In the natural process of human growth, my opinion can be fluid. My overall philosophy on humanity is constantly being refined and sometimes redefined as my life unfolds. Through One Voice, I hope to perpetuate a synergy of relationships between readers and myself with the overall goal of enhancing our lives, perspectives, and impacts on the world around us. On the other hand, ‘One Voice’ is a simple statement of solidarity among like-minded people who agree (or in some cases even disagree) with the overall philosophy and inclusiveness of One Voice. While I find it difficult to define my beliefs in simplistic terms like ‘left’, ‘right’, ‘liberal’, ‘conservative’, ‘communist’, or whatever other labels we can throw out there, I think the spectrum of my philosophies, as well as their place on the greater spectrum of philosophies, will become increasingly clear through my posts, as I have no intention of objectivity.I am not ready to categorize my blog just yet, however, the broad focus will be global and human issues. (What? …I said “broad”). Some might call it a political blog, but I’m not purely concerned with politics. My concern is the well-being of human beings and the global environment. So, in some respects, politics are crucial. More importantly, I am looking to promote and provoke discussion for systematic improvements in human relations on a global scale.

The majority of the economy is global. Even goods and services, relatively untouched by international forces, are impacted by historical repercussions of those forces. As social scientists, we, all too often, isolate and compartmentalize issues for the purpose of ‘scientific analysis’ thereby disregarding (or at least mitigating) the interconnectedness of institutions, systems, structures of people, states, and issues that create the realities we aspire to change. We cannot understand (and therefore alleviate) poverty, human rights abuses, and suffering without a justifiable historical analysis of global political and economic structures and their impacts on the localities we work with.

I will cover issues of economics, environments, politics, human rights, human relations, equality, fairness, freedom, and justice (to name a few) with the overall belief that that the systems of global human interactions are significantly flawed. Because I am a patriotic American, and unfaltering critic of the American government, I will also discuss the role of the US in these issues the issues I domestic topics. Some posts will be abstract, conceptual, and philosophical in nature while others may be a straightforward analysis of the day’s events.

Whatever the post, I hope to inspire or perpetuate some real, human, open-minded discourse as well as provide some clarifying analysis regarding the connections among complex realities. Most importantly, I hope to build a significant enough readership that will create a productive synergy of thought so we all can engage with, and learn from, each other. 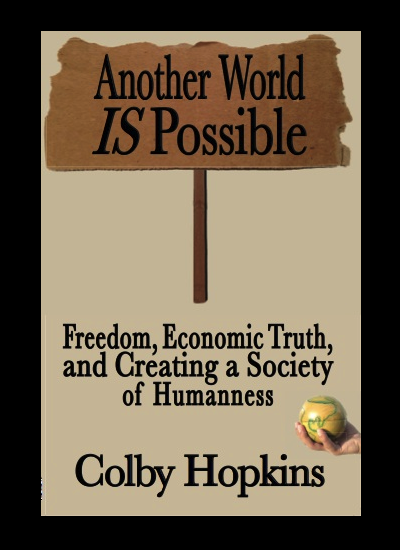